Abdulrahman Sabri’s mother has been knocking for six years on the doors of the military, local, judicial and security authorities; to search for her son, who is forcibly hidden in the secret prisons of Islah in Taiz, without a final response or response from anyone about the fate of Abdul Rahman, except for the echo of her wailing and the boundless pain that squeezes her heart.

An armed gang arrested and detained them in the hangar of the Asifra power station, which is under the control of the 22nd Mika Brigade.

Three days later, Al-Fandam, Bakr Sadeq Sarhan, received them and guaranteed their protection, as they had nothing to do with the Abu al-Abbas Brigades or any armed faction.

Abdulrahman's mother moved between the local, military, security and judicial authorities, but she returned empty-handed.  Eleven of the kidnapped persons who were detained with her son were released, but her son and companion Amjad Abdo Saeed were refused to be released. She does not know his fate and was not allowed to visit him even once.  All she was told was "Your son has been killed".  She asked them for his body, but they repeated their refusal, "They said your son was killed, so she asked for his body or an official statement of his death and to know the reason for his execution."

Whenever she asks for her son from the Taiz axis and Brigade 22 Mika, she is told that he was handed over to the National Security Agency, where he has disappeared until now.  Maha Abdulrahman's mother adds, "Even Israel allows visits to the abductees and determines the fate of the disappeared. Even al-Houthi allows (sometimes) to visit prisoners and delivers the bodies of those killed in its prisons."

But the military authority of Taiz is much worse than the mafia, and it is not much different from the Houthi militia and is distinguished from them by secret prisons.

Abdulrahman's mother repeatedly demanded that he be tried and brought to justice if he was guilty, but there is no way for that to happen in the Inquisition and Fascism.

Maha says: I met years ago a number of young men who were released and who were with my son Abdulrahman. They said there is nothing worse than secret prisons, torture, deprivation of sleep and food for days, and there is no defender or spokesperson for us. Even the Abductees’ Mothers Association was established to cover up the crimes of secret prisons in Taiz, which is supervised by the Islah military.

Abdulrahman's mother had a stroke and recovered, followed by pain, fatigue, seventh nerve and depression that has no cure except knowing the fate of her son.

Six years of absence and enforced disappearance are enough to reflect the extent of darkness and injustice prevailing in the city sector under the control of the Taiz axis.

"Nothing makes me want to stay in Taiz other than following up on the fate of my son, and if he is released or I know his fate, I will not stay there for a single day."

In addition to the physical and spiritual depletion, Abdulrahman's mother was financially exploited. The sums she paid exceeded six million riyals in exchange for knowing the fate of her son or meeting his needs and in exchange for his release.  "What sin did he commit to be imprisoned all this time?"

With tears, Abdul Rahman’s mother appeals to the leadership of the Presidential Council, the Attorney General, the Chief Justice, human rights organizations, jurists and everyone who has a voice, to look at the issue of her son and the issue of the forcibly disappeared in Taiz, this file that is still deliberately marginalized by the political and military leadership of Taiz. 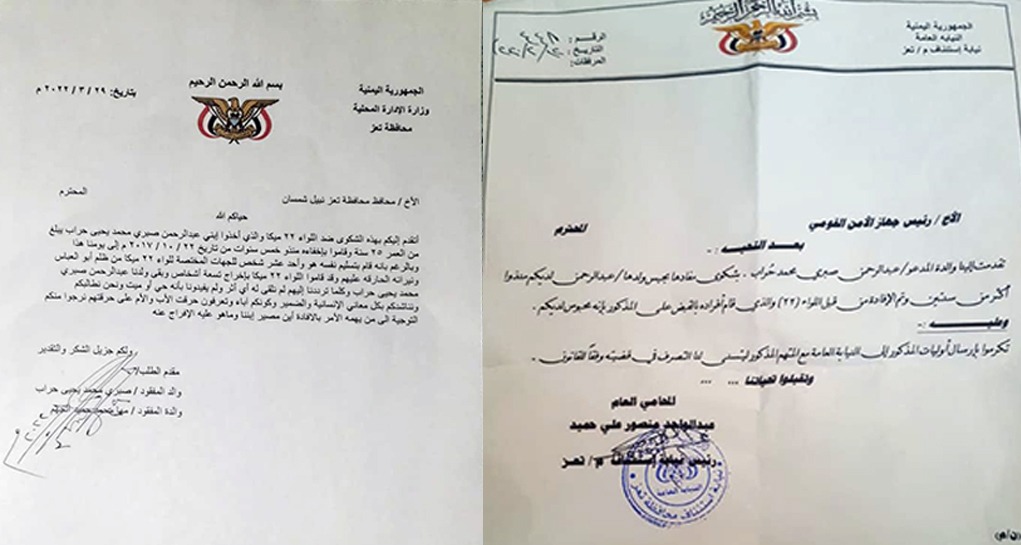 US report: Al-Qaeda's field defeats in Yemen appeared in the organization's propaganda

Tariq Salih mourning al-Maqaleh: He lived proudly of the victories of the September Revolution and died of pain at the return of its enemies