Al-Qaeda: "Ahwar" attack is an individual act that violates our orders not to target "Shaqra" forces

Al-Qaeda in Yemen repudiated the attack launched by its elements in the Ahwar district of Abyan governorate against the legitimate forces stationed in Shakra last Tuesday, which resulted in the killing of 5 soldiers, and prompted them to announce a military campaign to pursue the organization's elements.

In a statement, the organization explained that the attack was an individual act carried out by members of the organization, and said that they "violated the clear orders not to take any action against the Shaqra government at this stage, as part of the legitimate policy."

The statement denounced the announcement by Shaqra forces to organize a military campaign to pursue its elements in Abyan, calling on the tribes of the governorate to intervene to convince them to back off, warning at the same time of his readiness to confront "if it comes to closing all opportunities and efforts to push the fuse and ignite the war."  According to the statement.

Al-Qaeda reminded the legitimate forces of the incident of raiding the house of one of its members in the Al-Wadaya district and killing one of his relatives last year, indicating that he did not respond to this incident, asking them "not to be drawn into conflict with him."

Al-Qaeda's statement launched a violent attack against the UAE and the forces affiliated with the Southern Transitional Council, addressing the legitimate forces that entering into its conflict with it in Abyan would be in the interest of the transitional forces and the Emirates. 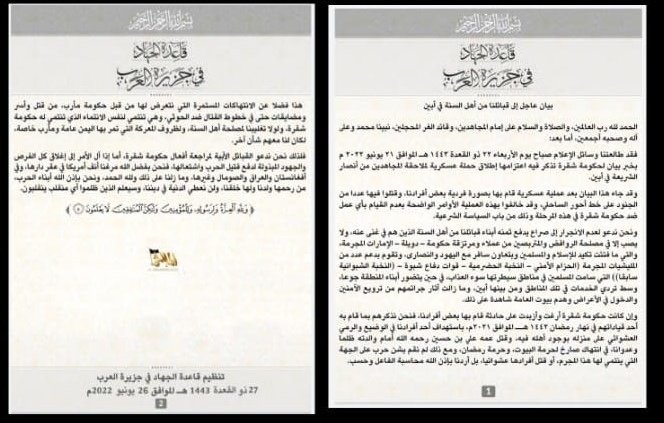 Al-Qaeda's statement comes in the wake of the developments that followed the Ojour incident, starting with the Security Department's announcement of a campaign to pursue Al-Qaeda elements and inviting the Security Belt forces to turn the page on the past and participate in it, which was immediately welcomed by the Belt Forces leadership.

Last Thursday, the provincial capital, Zanzibar, witnessed a remarkable meeting between the leadership of the forces affiliated with the Southern Transitional Council and the legitimate forces at the headquarters of the Giants Peacekeeping Brigades in Abyan, with the aim of joint security coordination to confront terrorist elements and Al-Qaeda in the governorate.

The war in Yemen: causes psychological disorders in children.

A Higher Committee for Revenue headed by Al-Zubaidi... An open battle against the war mafia

Shabwa's decisions confuse Sana'a...Houthi's support for the insults front against Al-Alimi and the coalition